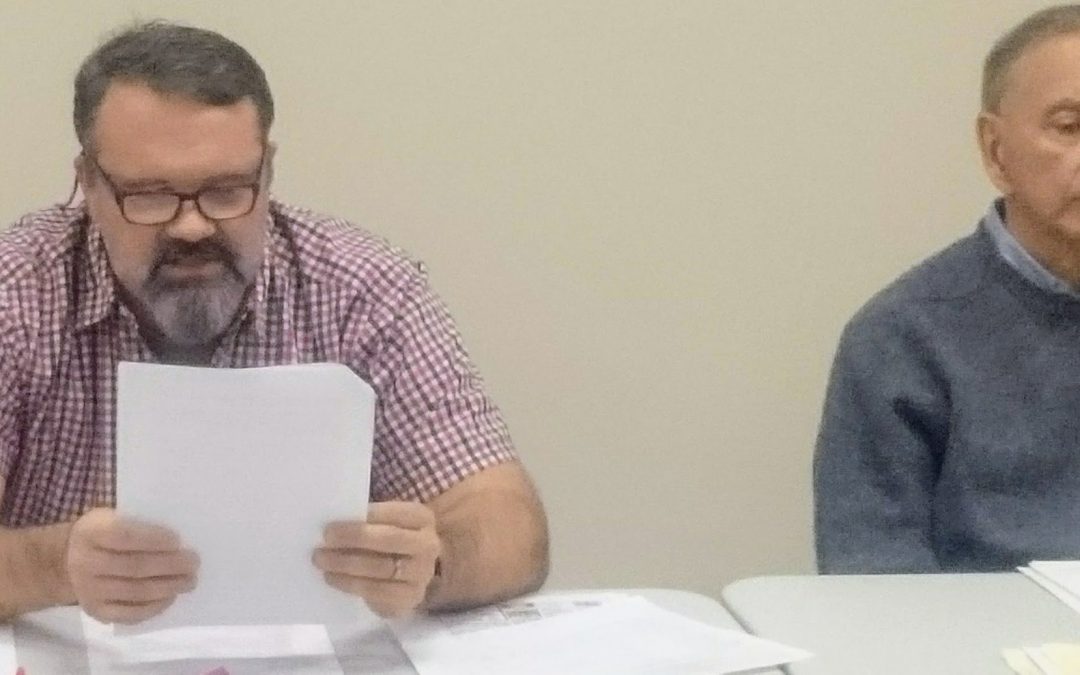 Thanks to Jim Buck, EBT resident and former supervisor, we have an audio file and transcript of Matt Schumacher’s comments on January 2, 2018.  Mr. Schumacher read these prior to taking public questions and comments when 80-100 people attended the meeting.

He has refused to release his version of his comments to date.  We would welcome his own version to avoid confusion or misinformation.

Here is the text of his comments.

Transcript of audio recording of 1-2 EBT meeting.  Unless noted, the speaker is Supervisor Matt Schumacher.

Before that starts, I’m going to read from a prepared statement.  It’s going to take a little bit.  So sit back, relax.  No mumbles and groans and grunts.  And when you get to stand up, stand up and comment.  The biggest thing is we don’t need to say the same thing 20 times. X, there’s no need for you to stand up and say X again, so we can get out of here at a decent time with everybody’s voice being heard.

Steckle – Will there be a time limit on it?

Daniloff – No more than 10 mintues.

MS – Three.  Here’s the uh … it is what it is.  Let’s get it out there and discuss it.  So, I’d like to offer comments regarding the township’s relationship with the BVRA.  Let’s first start with the information we were given at the end of 2016, that the BVRA finished the year with a $90,000 carryover, that every program they ran ran in the black, and that the pool broke even.  With these truths, is it not prudent to review the agreements in [inaudible] impact their moneys?  This board has stated many times and in numerous ways that EBT is committed to working with BVRA and financially supporting their recreational programming for EBT residents.  The board sees great value in BVRA.  However, it seems that no matter how many times and how many ways this board states that we are committed to the success of BVRA and look forward to continuing to provide financial support, certain local people and office holders seem to believe it is in their political interest to keep the division going rather than engaging in good faith dialogue to ensure BVRA is well supported.  The Standard-Journal and Daily Item have both reported fairly and accurately about BVRA, summarizing what the position of the board is and emphasizing that EBT is not interested in abandoning BVRA.  EBT is organized under Pennsylvania law as a self-governing independent municipality, as a recognized township of the second class under the Pennsylvania Code, residents elect a governing body consisting of three supervisors.  Each supervisor and the board as a whole has a legal and fiduciary responsibility duty to EBT residents to ensure that all moneys are spent legally, wisely, and to the benefit of EBT residents.  This includes undertaking due diligence and proper oversight for EBT dollars awarded to other entities that provision services to EBT residents.  Providing oversight and fiscal accountability is one of the most important responsibilities of the board.  We are obligated to undertake periodic reviews of agreements with outside entities.  It is important to note that the IGA was with the borough, not with BVRA.  BVRA is not a part of the IGA.  BVRA is simply a funding beneficiary of this independent funding agreement between two municipalities.  BVRA would continue to exist if no IGA were in place.[J1]   Any intergovernmental agreement that provides support to BVR is no different.  In November the township notified the borough of its interest in meeting to review the current IGA.  This request is not unique, especially since the IGA is  self-renewing unless negotiated.  This is how self-renewing contracts work.  They are always subject to renegotiation, and it is why they are written the way they are.  The IGA contains a termination clause allowing one municipality to provide the other with a one year notice.  The board was very clear that this does not mean that EBT is abandoning BVRA, and that we would continue to provide funding.  We are still open to discussion with the borough on a possible IGA for post-2018.

So what exactly is the board interested in discussing with the borough and with BVRA if they change their minds and are willing to meet.  Here are some discussion points.

Is there a way we can provide the necessary financial support without entangling each municipality with an IGA and its obligations?

Why is an IGA necessary or beneficial?

Is an IGA necessary for BVRA to obtain state and federal grants?  If so, which grants?  DCNR grants are for parks and greenspaces, not for programming.  They can be applied for by EBT, the borough, BVRA, anyone independent of the IGA.

Given that municipalities can unilaterally withdraw from the IGA with one year notice, how does this provide financial stability that BVRA claims they need for grant applications and for general business decisions?

Would it be beneficial to BVRA if the municipalities also provided funding?  Are not these municipalities whose residents and children also benefiting from BVRA programming interested in joining the IGA and providing funding?  If not, why not?

Has the fact that 100% of the BVRA programming and properties is now located in the borough been taken into account in the current IGA?

None of the properties, parks, buildings that are used and maintained or rented by BVRA are in EBT.  In essence, EBT is paying for the maintenance of properties inside the borough.

JB – You have the Rail Trail

MS – I’m not going to throw you out.  Just hold your tongue until we get to you.

MS – We’ll get to you.  The Rail Trail is obviously in, I think it’s five, five townships.  How many [townships] in Union County?  15

MS – 14.  OK.  So this is clearly of benefit to the borough and needs to be recognized in any agreement.  For example the BVRA rented office space in the EBT office building.  EBT received funds for annual rec from BVRA, and a benefit to taxpayers, which allowed us to justify a portion of our funding.  BVRA is now renting from a private landlord situated within the borough.

The current IGA requires that EBT taxpayers fund BVRA with $116,031.  This year, the borough’s obligation is nearly half that at $65,257.  Why is there such a disparity when our populations are roughly equal?

Why is the borough not as committed to BVRA funding and providing recreation to the area as EBT?

Getting rid of the IGA would allow the borough to contribute as much as they see fit versus being locked into a fixed amount.  Do they not want to pay more/help?

If we are to base our funding levels based on BVRA registration activity use, then why are we concerned about government funding at all?  Shouldn’t BVRA simply charge the same registration for anyone who wishes to participate in their programming?  Why would we care if Mifflinburg residents want to participate in BVRA.  I would suspect that the borough officials would say that it is unfair considering that the borough taxpayers are financially supporting BVRA while Mifflinburg does not.  Yet while the borough officials outrage when we raise the same question about the unfair disparity of the tax burden to EBT taxpayers under the current IGA.

As a supervisor particularly committed to recreation and open space, I am particularly interested in a report issued by the Green and Open Space Resources Commission that explains that EBT is the municipality most in need of parks and open spaces.  The report states in chapter 3 that the single largest municipal deficit now and projected for the future is East Buffalo Township, where the population has increased substantially over the last several decades, but the amount of community park land has not.

Despite this report’s finding, EBT has donated nearly $900,000 to BVRA over the last 10 years.  Why?  Because we understand the need and value of keeping up the parks and grounds this area has already developed versus leaving them to wither away while we think about only EBT residents.  And yet borough officials claim EBT is not doing enough to subsidize the borough parks and recreation.

We also need to look at who participates in BVRA programs and how the upcharge of roughly $2 – $5 depending on programming for non-residents covers the cost of BVR programming.  According to 2016 numbers, there were 5,240 registrations of those 2,743 (52%) were from EBT and the borough, while 2,497 (48%) were non-residents.  Is the upcharge enough, or are EBT residents not only subsidizing borough residents who participate in BVR programs, but also other non-EBT residents as well?

The residents of both EBT and the borough pay a combined 20% of the BVRA budget, but only get approximately a 5% to 8% discount.  This doesn’t add up.

Using the 2016 census estimate and the 2016 registration, only 22% of EBT & the borough residents use BVRA.  Is the annual budget of $181,000 contributed by EBT and the borough taxpayers money being used wisely to support 22% of the population?  What do the other 78% get?

Other issues that need to be explored are related to actual programming.  The board believes that programming and activity reports should be conducted to research and analyze the recreation needs and programs that exist and will exist in the area.  Given that the Miller Center, the Green Space, and the YMCA come and are providing and expanding their programming, we need to make sure that our tax dollars are spent on a program that is not duplicated by other entities.  Such a review would allow BVRA and all area recreation service providers to decide what programming they will offer to the community so there is no duplication, or minimize duplication.

Also recreation does not need [inaudible] age specific.  I believe such a report would also give us a better view of what recreation services and opportunities are being provided to all age groups.

So these are some of the questions we wanted to explore with the borough officials.  We hope that they will [laughs] look forward to meeting with us and re-elect discussion regarding these issues so that we can make BVRA a stronger organization, provide for recreation services for our residents, and work together as good neighbors.

So, with that said, we’re going to go through the list.

At this point, it switched to public questions and comments.